This is a very quick post prompted by the Word of the day challenge Appease which reminded me of Neville Chamberlain and his attempt to appease Hitler prior to the Second World War.

The photo below depicts his return from Germany on 30th September 1938 when he gave his speech, I have in my hand a piece of paper from Heir Hitler. 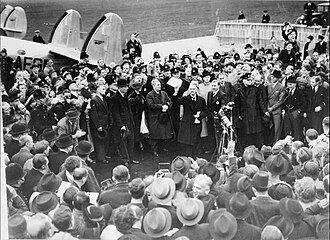 Often miss quoted he said, "Peace for our time." It was not to be and on 3rd September 1939 he gave the following speech.

"This morning the British Ambassador in Berlin handed the German Government a final note stating that, unless we heard from them by 11 o'clock that they were prepared at once to withdraw their troops from Poland, a state of war would exist between us."

"I have to tell you that no such undertaking has been received and that consequently this country is at war with Germany."