Just a very quick post today concerning the trades description act and some Original Guinness I purchased for the Christmas festivities which says on the tin; if you were in a pub sometime between 1821 and 1970, chances are this is the Guinness you would have been drinking. Originally brewed as the XX version of our Porter, it’s hoppy, roasty and crisp with a bittersweet finish.

I can speak with some authority on the subject as at that time I was married to a girl whose parents were Irish and every Friday my wife and I went to visit my in laws for bacon and cabbage, Guinness and a decent selection of Irish folk music.

The quality of the Guinness in their house was superb as it came in bottles directly from Ireland and was fresh as a daisy and far superior to that which you might get in a British pub, it was smooth, creamy and with a proper Irish Guinness head, rather like I was expecting when I purchased the Original Guinness.

I was originally thinking that it might not comply with the trades description act but then as it says, if you were in a pub in 1970 this is the Guinness you would be drinking and indeed it is, for in 1970 no British pub could produce a decent pint of Guinness to save it’s life. This flat rather bitter drink is exactly the awful pint that would have been available in a 1970’s pub, however it was Christmas and the theme for our festivities was Irish Christmas so I persisted and eventually managed to neck quite a few.

Here’s to New Year when I think our theme for the event will be called decent champagne night!


I was feeling the urge to write as I don’t seem to have written much of late except the occasional plug for my latest children’s book but at this time of year, I find myself obsessed with Christmas. Actually, to be more precise I would say my wife is obsessed with Christmas and I am doing my best to assist her in the process.

I have mentioned before that I have objections to Christmas, not you understand the actual holiday itself but the enormous waste of money spent on food, drink and worst of all vastly expensive presents for all and sundry.

My ideal Christmas celebration would consist of one of my wife’s rather splendid chicken dinners with all the trimmings, some wine, some spirits and a few beers or lagers and no presents whatsoever.

We obviously have quite a few people over for Christmas which may explain why I am having trouble getting by the mountainous pile of presents which have accumulated round the Christmas tree.

This post has been interrupted at least two times as we have had to visit the supermarket on numerous occasions to stock up with vast amounts of food sufficient to survive a nuclear holocaust.

We have as I write just returned from such a trip and I noticed as I went around quite a number of strong men standing by their trolleys with sunken eyes, staring into the middle distance, for I too know that look. They had lost the will to live and some like me were close to tears.

When we finally unloaded everything and I had finished painting the banister rail for the hall, stairs and landing which we had to redecorate, although quite why it was so important it had to be done at Christmas, I have no idea but the priorities of a woman are far different from those of a man. Personally, I would have thought that finishing the head gasket on my Morris Minor which I started some months ago was far more important, but who’s to say.

All I have to do tomorrow is put up the Irish flag bunting and the orange, white and green balloons and the rest of the paraphernalia which will enable us to have our Irish themed Christmas and I can settle down on Christmas day and enjoy a few Guinness whilst listening to The Dubliners and The Wolfe Tones and others for a few jigs and reels.

Well that’s my post for today, all that is left for me to do is to apologise to everyone who is still waiting for their Christmas cards to arrive, as we have been very busy this year and to wish all my friends and readers a Happy Christmas and a wonderful New Year.

I am delighted to announce that the latest Nobby Brasso book is available on Amazon continuing the story of the popular boy footballer Nobby Brasso. 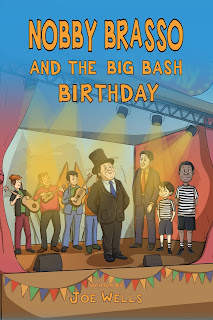 Available on Amazon
Posted by Joe Wells at 20:08 No comments:


The following is an excerpt from an article in the Guardian newspaper concerning the new police tactic of knocking fleeing criminals off their mopeds.

A Metropolitan police driver is under criminal investigation after using a special tactic to deliberately knock a fleeing suspect off a moped.

The teenager, aged 17 at the time, suffered head injuries and a broken foot as he fled from police, he was not wearing a helmet and later pleaded guilty to several offences.

The officer is believed to be the only one so far to face criminal investigation after using the controversial “tactical contact” measure, whereby police in cars knock a suspect off their moped or scooter, so they can be arrested.

The Met adopted the tactic in October 2017 as it tried to quell a wave of robberies carried out by suspects on mopeds. The incident subject to criminal investigation happened a month later and is one of two where suspects suffered serious injury.

The prime minister and home secretary have supported the tactic, but others such as the shadow home secretary, Diane Abbott, have expressed concern.

The police officer has been interviewed under caution as part of an investigation by the Independent Office for Police Conduct (IPOC). The watchdog said it would decide within weeks whether the officer should be referred to the Crown Prosecution Service to face criminal charges, for an offence such as actual bodily harm.

As well as a criminal investigation, the officer has been told he faces a disciplinary investigation for potential gross misconduct.

The teenager was not wearing a helmet and the IOPC said he suffered serious head injuries and fractures but was discharged from hospital a few days later.

The IOPC said its investigation was “looking at the circumstances around the authorisation and use of the tactical contact”.

The teenager was charged and later appeared at a youth court where he pleaded guilty to attempted theft, interference with a vehicle, driving with no licence, driving with no insurance, and dangerous driving. Because of his age he cannot be named.

When the Met released footage a fortnight ago of its drivers knocking suspects off mopeds, it said it had used tactical contact 63 times. It also said the tactic would only be used by specialist officers called “scorpion” drivers.

It is the second tactical contact incident being investigated by the IOPC. Another took place on 27 March this year in Ealing, west London, where a suspect in his 20s suffered a broken leg after a police car knocked him off his moped. The IOPC said the investigation was continuing, with no warning notices served, meaning officers are being treated as witnesses.

The IOPC said it had a duty to investigate cases where suspects were injured after being knocked off their mopeds by police. “Ultimately no police tactic can ever be used with impunity in a country where we police by consent – be that tactical contact, the use of firearms or the use of restraint. It is always a matter of whether it’s reasonable and proportionate in the circumstances,” it said.

So, to sum up a young person can commit a violent robbery armed with a machete and escape on a moped swerving through the traffic and on the pavement endangering the lives of members of the public but the Shadow Home Secretary has expressed concerns over the police tactic of knocking the escaping suspect off their mopeds.

The IOPC said it had a duty to investigate cases where suspects were injured after being knocked off their mopeds by police. “Ultimately no police tactic can ever be used with impunity in a country where we police by consent.

I don’t know about consent, would they prefer the police walked in front of the fleeing felon and asked them nicely, “would you mind stopping young man, if it’s not too much trouble?”

Unfortunately, we no longer live in the age of Dixon of Dock Green who could tackle an armed intruder with a small wooden truncheon by uttering the phrase, “come on lad hand it over.” Whereupon the young thug would respond, “okay guv, it’s a fair cop.”

One doesn’t wish to be too controversial but if I had just been threatened and robbed by a youth wielding a machete, I would have no problem with the police knocking them off their moped to stop them fleeing the scene and I rather suspect that if Diane Abbot had actually experienced a similar violent attack she might also change her views on the matter.

Here is the latest piece of news that proves the snowflake generation are trying to take over again and adds yet more credence to my belief that the whole world is going stark staring raving mad, although it wouldn't surprise me if I were inundated with complaints from various mental health organisations complaining at the use of the phrase "stark staring raving mad."

Allegedly the following is a list of phrases which it has been suggested will be phased out as they have become politically incorrect and the suggested new versions, starting with bringing home the bacon which may offend vegans.


Out: Bring home the bacon
In: Bring home the bagels
Out: Let the cat out of the bag
In: Spill the beans
Out: All your eggs in one basket
In: All your berries in one bowl
Out: Open a can of worms
In: Open Pandora’s box
Out: Flog a dead horse
In: Feed a fed horse
Out: Hold your horses
In: Hold the phone
Out: Killing two birds with one stone
In: Feeding two birds with one scone
Out: Taking the bull by the horns
In: Taking the flower by the thorns
Out: More than one way to skin a cat
In: More than one way to peel a potato
Out: Be the guinea pig
In: Be the test tube
I have never heard such a load of nonsense, what I wonder would they do with the joke of the fellow who tried, flagellation, necrophilia and bestiality but had to give it up as he felt he was flogging a dead horse.
As usual with modern life I am frequently lost for words to describe suggestions like banning the expression "bringing home the bacon"  but on this occasion I have come up with some that I think sums up the stupidity of this suggestion.
"WHAT A LOAD OF BOLLOCKS."  Whether this expression will offend anyone, I have no idea but there's always someone ready to take offence, especially in this day and age.
Posted by Joe Wells at 19:52 No comments: