Apparently a school has brought in a new system whereby the pupils will be compelled to have number plates on their bicycles so they can be identified should they be riding badly or offensively.

There has been some suggestion that a number plate scheme for all bicycles would be a good idea and I for one have to say I would thoroughly endorse the idea.

I would even go so far as to suggest that all bicycle owners should have number plates, insurance and pay road tax to use the road, which would keep them in line with all the other road users in this country.

On a recent trip through London I was astounded how much of the available road space is given over to cyclists and yet none of them pay a single penny for the privilege.

In certain parts of London as much as half the road is given over to cyclists, great swathes of the available road are painted blue and yet not one penny is collected from these people who command a disproportionately large area of the road. 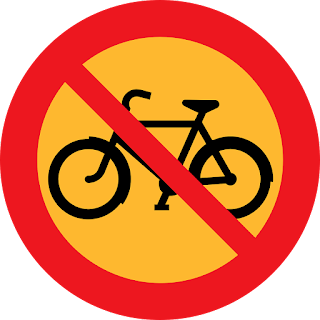 Without putting to fine a point on it, I think it's about time to ban all bicycles from the road until they  are properly insured, have licence plates and pay road tax equivalent to the amount of road they are allotted, it seems only fair.
Posted by Joe Wells at 21:34