I don't want to grow old.

I do not want to grow old, I do not want to wear beige and grey clothing and wear cornish pasty shoes and arrive at the hospital blood test waiting room an hour before it opens.

I was reminded of this, when I arrived for my fasting blood test this morning, which is something I hate doing, especially in this baking hot weather for you are allowed nothing to eat or drink, except water for ten hours before the test. Gagging as I was last night for a lager I had to stiffen my resolve, bite the bullet and settle for water, not one of my favourite beverages, for as W C Fields used to say, "I don't drink water, fish have sex in it."

The blood test centre opens at 8.30 in the morning and I had rushed to get there at 8.15 but even though it wasn't open there was a large crowd of older people already there, in fact when I took my ticket from the machine it was already at number 33. I know when you get older you don't need so much sleep, but these people must have been up all last night.

What is it that attracts older people to beige and grey, it seems that it is almost compulsory, along with the cornish pasty shoes. I imagine these people must have been at the cutting edge of fashion when they were young, beatnicks, teddyboys and the swinging sixties, Carnaby Street and all that goes with it and yet they must all enter an older persons clothing emporium and say to themselves, "That beige jacket would go lovely with my grey trousers," I wonder why? It seemed to take forever but eventually my number was called and I dashed in and gave my blood and having done the arithmetic was very impressed to see they averaged one person every one and a half minutes.

They could have got their average up a tad had the older folk moved a little quicker, for even armed with the cornish pasty shoes which must have given tremendous traction I felt they were not making best use of it and dawdled in as if they had all the time in the world, which I suppose they actually did have as they were retired and had nothing better to do with their time.

I'm always reminded of the great Tony Handcock and his brilliant sketch, "The blood donor," who asks when donating blood at the blood bank, "well, how much do you want?" The reply being, "a pint." To which Tony Hancock replies, "a pint, that's very nearly an armful." 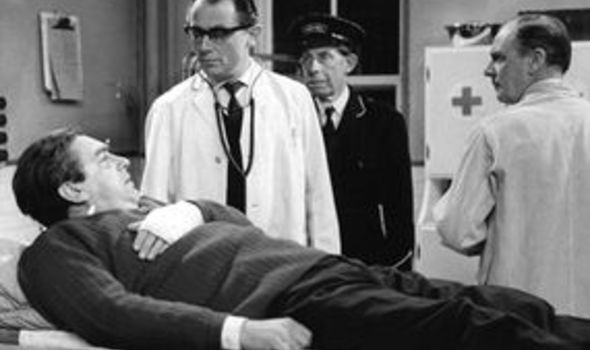